A family business for over 100 years. 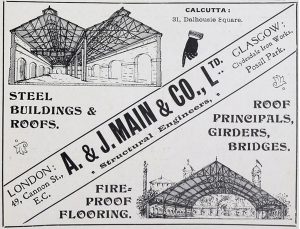 One of the perennial problems of corrugated iron roofing was making the holes where the fixing bolts attached the sheets to the structure completely watertight. A family story recalls that one day whilst relaxing with a cigarette, FG rolled a piece of metal foil from the cigarette packaging into a ball and then pressed it flat into a kind of flexible disc. It suddenly occurred to him that if a hole was made in such a disc and a flange was made around the hole, the object would become a flexible washer which could be fitted to the fixing bolt in corrugated metal sheeting and would adapt to the shape of the corrugation and provide an effective seal.

Hence, in 1905, F G Price invented and patented the “limpet washer” which provided him and his family the princely income of around £1,000 a year for the duration of the patent which allowed the family to return to Scotland. 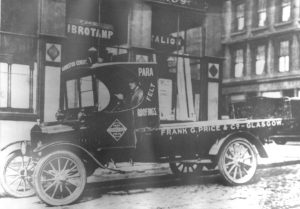 F G Price & Company was subsequently established as Merchants and Agents in Glasgow in 1906 and the company has evolved over the years under successive generations of family management. Following in FG’s footsteps, his son Frank B Price (FB) developed the business as major suppliers and installers of fibre cement roofing materials throughout the UK.

FB’s son Bill succeeded his father in the 1960’s and continued to develop the business as pioneering importers and installers of aluminium roofing systems, particularly from Scandinavia. Bill was instrumental in the establishment of the Scottish branch of the National Federation of Roofing Contractors and was the inaugural president of the Scottish Federation.

Bill went on to develop and patent the first completely non-combustible roofing system, Ecometal, which was manufactured in Clydebank and was used extensively on many high profile projects. This business was sold to a UK PLC involved in the manufacture, supply and distribution of building products and systems in 1987.

Bill subsequently developed and patented a new method of joining aluminium gutters without penetrating bolts or fixings – a major problem for conventional jointing arrangements which invariably leak. The Hi-Drain Gutter System is licensed to a number of specialist manufacturers and more than 60,000 metres of this gutter system has been successfully installed to date.

In 2007, day to day management and operation of the business passed to the next generation who are focussed on continuing to successfully grow the business and maintain the family tradition of innovation and quality.

For more information or to discuss a project, please contact us: